A Balance Between Creativity and Achievement

Lyndon Baines Johnson was the 36th president of the United States of America ("Lyndon B. Johnson", 2015).  In 1965 he signed into law the Elementary and Secondary Education Act (ESEA).  The U.S. Department of Education states that President Johnson's premise of this act was to ensure a full educational opportunity was our first national goal (http://www.ed.gov/esea).  Since 1965, the Elementary and Secondary Education Act has provided districts throughout the United States financial assistance through grants.  These grants were provided to districts that served low-income and special needs students (http://www.ed.gov/esea).  This was the original deed that put accountability of United States schools on the map and legislation from this point has been a manifestation of this act.  The accountability measure being utilized for comparison purposes was that of worldwide student achievement (http://www.ed.gov/esea).

In 2002, the Elementary and Secondary Education Act was reauthorized with bipartisan support.  The name given was No Child Left Behind.  This reauthorization was under the guidance of President George Walker Bush.  President Bush intended to eliminate the achievement gap among underserved groups of students.  The No Child Left Behind legislation ramped up accountability on all District's served with federal funds (http://www.wed.gov/esea).  This accountability included the implementation of statewide assessments that measured student achievement in a disaggregated format.  The disaggregation of the data provided comparison measures of socioeconomic status, ethnicity, and disability (http://www.ed.gov/esea).  Achievement results were to be reported to the public after data was released. 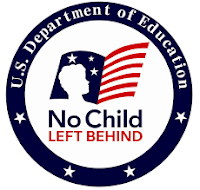 Although accountability has its place, opponents have consistently applied pressure on legislatures to eliminate assessment requirements of these legislative actions.  On December 10, 2015 the United States signed into law the Every Student Succeeds Act.  This reauthorization of ESEA had some appropriate adjustments, however, it did not go far enough to bring into balance two important components of a child's education, achievement AND creativity.

For a look at comparative data between ESSA and NCLB, click here.

The federal government and citizens of the United States have applied extreme focus on accountability since 1965.  Starting in 2002 that focus was applied to standardized assessments.  In Minnesota, students take the Minnesota Comprehensive Assessments each spring.  The final results of these assessments arrive in districts the following fall.  School districts throughout the State are then "graded" on their achievement results and progress.  Parents and community members are provided the results through website postings, newspaper articles and mailings.  Although accountability and communication are important, it is my firm belief that we need to reprioritize for our students' sake.  In an effort to save you time from further reading, I have provided bullet points below in support of my argument for efficiency purposes:

Obviously we want to ensure our students learn at high levels and leave our schools exceptionally prepared to enter college or careers.  However, I believe this can be achieved by balancing our systems to ensure all students are provided with what they need.  If we can partner in this effort to transform our educational practice, I believe the students at Janesville-Waldorf-Pemberton will be eternally grateful for the education we provided them.

The video below was prepared by Sir Ken Robinson and is a nice depiction of current systems of reality in the United States.  This video is a bit lengthy (11 minutes and 41 seconds) but well worth the time.  Enjoy!


Here are some other interesting pieces to consider: